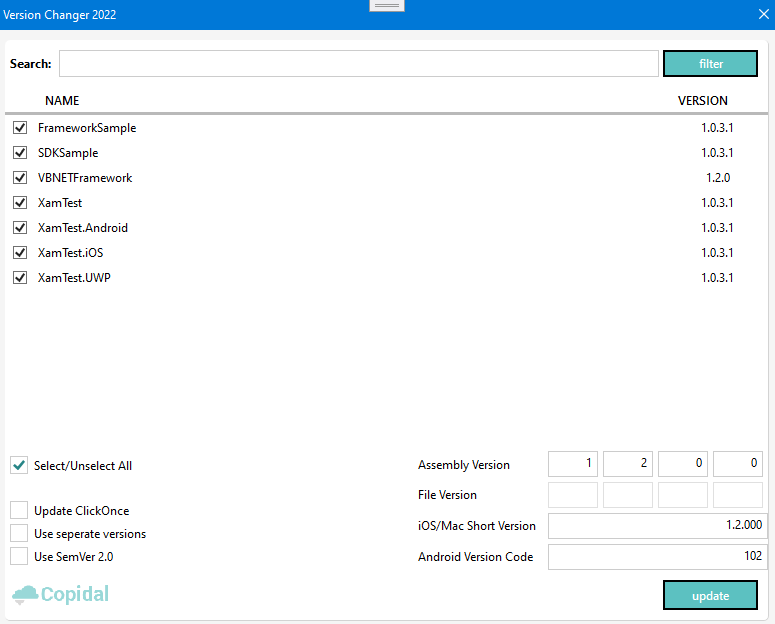 What is Version Changer?

Version Changer is a Visual Studio extension that makes it simple to change the version numbers of all the projects in a solution. We have been working on this since 2012 when we were using it internally. In 2014 we published it to Visual Studio Gallery (as Marketplace was known at the time).

In 2019 we made it open source so that anyone could contribute and help maintain and improve it. Up until recently this has been a personal project from one of the founders of Copidal, but now it will become a Copidal product.

Why move it to Copidal?

By bringing it under the Copidal umbrella we can spend more time on it and provide better support, faster turn-around of bug fixes and new features.

What does this mean for “Version Changer”?

Only good things. It means we will have more time to work it, fix bugs and add new features. It also means we can work to update the Mac version of the extension and bring it inline feature wise as well as extending it to VS Code and DevOps. We can also spend more time on testing and documentation.

It will remain open-source and free with the only visible change being a small Copidal button in the corner.

Where can I install it?

There are two versions available on the Visual Studio Marketplace.

The version for Visual Studio 2017/2019 is available here

The version for Visual Studio 20022 and above is available here

It will work with at least the following project types

We will be working to add new features to the extension such as: